Detective VDT on the paint area to obtain DNA samples

One day preparing to welcome the storm, the winds like to break the thin aluminum door exit staircase Vimeco building on Pham Hung Street, Cau Giay District, where the detective company VDT Hanoi. The weather is like this, the detectives are thinking of "comforting" but then the knock on the door hesitates and the middle-aged woman appears. The face is elegant, noble appearance, but the sad expression in the corner of her eye made some young private investigators are rumored eight stories suddenly silent.

Gently rolling the cup of hot tea on hand, the woman hesitates:

My father has just created a painting. There are "ca ca-ve" in Yen Bai to catch him to do procedures to receive children. I'm already up there. He was a little more than a month old, but his mother, very young at first, was criminally ill. It showed me the bills he deposited monthly in the post office. Easy to several hundred million already. It's still busy, says no money. If he does, he will get the child. You're dead. This has spread, he only retired early … 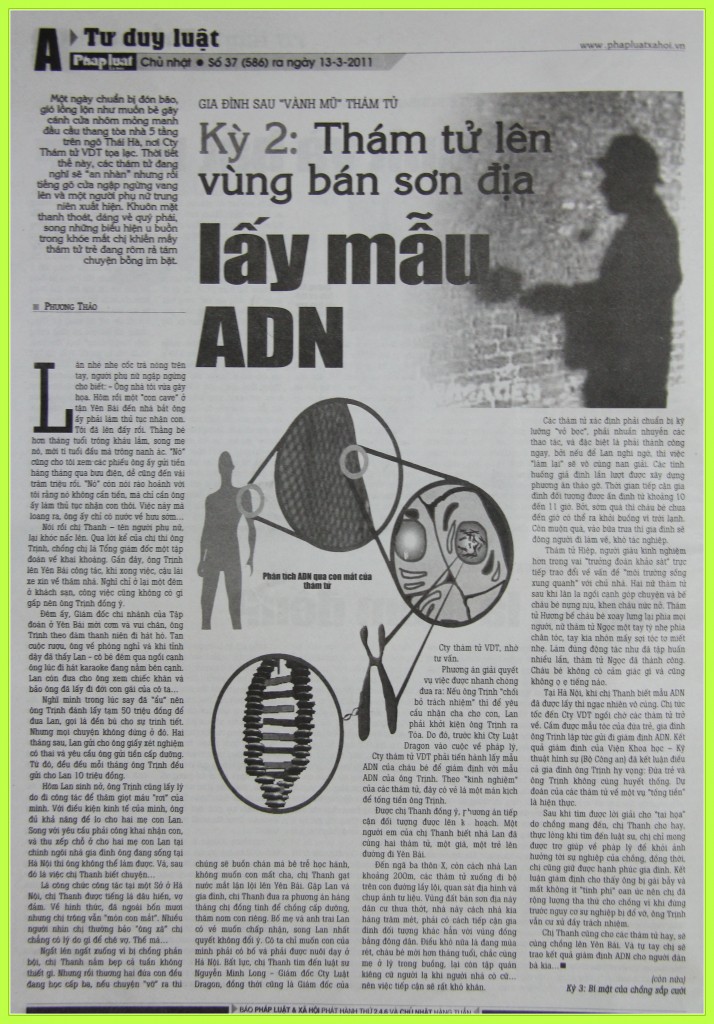 Then, Ms. Thanh (the name of the woman) cried again. Through her narrative, Mr. Trinh, her husband, is the General Director of a mining corporation. Recently, when Mr. Trinh went to Yen Bai to work, when he finished work, he drove home to visit. Thought only sleep a night at the hotel, work is not so Mr. Cheng agreed.

That night, the director of Yen Bai branch invited his wife and fun to follow the youth to sing. He went to his room, and when he woke up he saw her – the girl last night sitting next to him while singing karaoke lying next to him. Lan also showed him the towel and told him to take her daughter's life.

Thinking of being drunk, he had to get 50 million to take her, called compensation for the virginity. But things did not stop there. Two months later, Lan sent him a pregnancy test paper and asked him to send a pension. From there, every month he sent to Lan 10 million.

Day of birth, Mr. Trinh also take the reason to go to work to visit his "drop" blood. With his economic condition, he was able to take care of her mother and son, but demanded to publicly accept the child, and arranged for the mother and son in the same home where he lived. Hanoi, he could not do it. And then that's what Thanh knew …

As a civil servant working in a Department in Hanoi, Ms. Thanh is known as a gentle wife. In form, in addition to forty but she looks still "worn eye". Many people look at her often told his "husband" no reason to criticize his wife. So that …

Fainted fainted because of her husband's bumper, Ms. Thanh lying down the whole week without anything. But then injured two children are in high school, if the story "broken", they will be bored tired school children, do not want to lose father, Ms. Qing wiped tears to Yen Bai. Meet with Lan and her family, Thanh proposed a monthly plan to agree to husband support, visit her own children. His parents and brother Lan seem to want to accept, but Lan insisted not change his mind. She only wants her children to have a father and must be raised in Hanoi. Helpless, Ms. Thanh came to Lawyer Nguyen Minh Long – Director of Dragon Law Company, also director of VDT detective company, thanks for advice.

The case was quickly resolved: if Mr. Zheng "denied responsibility", then to petition him father, Lan must sue Trinh to Court. Therefore, before the Dragon Law Firm entered the legal battle, Detective Agency VDT must carry out DNA samples of children to assess with Mr. Trinh's DNA samples. According to the "experience" of the detective, this seems to be a drama to blackmail Trinh.

As agreed by Ms. Thanh, the object approach is implemented. One of Thanh's siblings knew Lan, along with two detectives, one old, one departed from Hanoi to Yen Bai.

At the junction of X village, about 200 meters away from the house object, the car stopped. Detectives walk down the muddy road, observe the terrain and photograph the document. This semi-residential land is sparsely populated, this house is hundreds meters away from home, must approach the family object is different from the usual way in the densely populated. It is difficult in the cold season, the new baby than months old, sure with her mother in the room, then, the habit of abstaining from strangers family … so the access will be very difficult.

Detectives must carefully prepare the "cover", must smooth the operation, and especially to succeed immediately, because if Lan is suspicious, the re-work will be extremely "difficult." Assumptions are, in turn, formulated to solve the problem. Approximate time to reach the target family is from 10 to 11 hours. Because, soon enough, the baby is not able to leave the room because it is cold. Too late, at lunch, the family will be crowded, difficult to work.

Detective Hiep, the most experienced Detective Agency VDT, as the head of the delegation directly discuss the issue of "living environment around" with the host. Two female detective after the next sit and talk and carry her baby nực, praise her sobs. Detective Flavor carrying the child turned his back to the people, female detective Ngoc a hand bobbits in the hair, the other pick up some light silk hair. Having done the same training as the company had trained many times, Detective Ngoc succeeded. The baby does not have any feelings or cries.

In Hanoi, when Thanh knew that the DNA sample was taken, she was surprised. Suddenly to the Detective Agency VDT waiting for the detective to return. Having taken the baby's hair, Trinh's family immediately dispatched to inspect the DNA. The findings of the Institute of Criminal Science and Technology (Ministry of Public Security) concluded that the Trinh family was hopeful that the baby and Mr. Trinh were not of the same bloodline. Predictions by detectives of an "extortion" are realistic.

Ms. Thanh said that when she comes to the lawyer, she only wants legal help to avoid her husband's career, at the same time. , she also kept happy family. The assessment concludes that he was trapped and lost a lot of "money" unjustly, so she generously forgave her husband when he faced the risk of his career being broken, Trinh still behaving like a full man. Ms. Thanh also said that she and her husband will visit Yen Bai to visit the baby and she will give the results of DNA testing to the other woman.